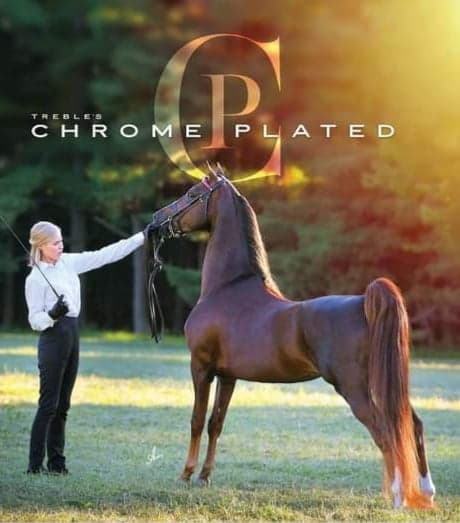 Just hitting 5 this year, Treble’s Chrome Plated is a new addition to the world of Morgan breeding. With his first foal crop expected in 2021, this flashy chestnut promises to gift his stellar conformation and show horse attitude to his future progeny. “Ranger” has a great length of neck with an amazing shoulder, a strong topline and a wonderful length of hip” explains Lynn Miller, who owns the stallion along with husband James. “Combine that with curvy, charismatic natural motion? He pretty much embodies my ideal Morgan Stallion.” His personality is notably playful and kind, whether he is working or playing with his Jolly Ball. While Lynn has the experience of growing up with Morgan Breeders for parents, the Millers can thank Carol Hudson and her Trebles Morgan Manor breeding program for their stallion’s favorable traits.
Take one look at Ranger’s pedigree and it is easy to see why Lynn identified him as a perfect breeding prospect when he was just 10 months old. He is by the prolific Tug Hill Command, who was known to sire more than 250 foals between 1985 and 2018 and who was himself a Waseeka’s Nocturne grandson. On his dam’s side, Ranger is out of the Broodmare Hall Of Fame mare Treble’s Pompp and Byzazz. By the wildly successful show stallion Stonecroft Byzantine and out of a War And Peace/Pompp And Pazazz daughter, she is the epitome of her lineage, so the success of her offspring is practically expected.
With lineage steeped in Morgan royalty, Ranger her been anything but a pushover in the ring himself. At Morgans Grand Nationals in 2018 he was the Reserve World Champion Junior Stallion. In 2019 he took home two World Championships in the 3-Year-Old English Pleasure division. He closed out 2020 with the Reserve Grand National and Reserve World titles in the Junior Division. With all this going for him, Ranger and his get are definitely going to be the ones to watch in the coming years. “Jim and I are very lucky that Treble’s Chrome Plated is the culmination of decades of breeding excellence from Carol Hudsons’ Trebles Morgan Manor breeding program. The Trebles stamp is very evident in our stallion” Lynn concludes. “When you look at the contribution Carol has made to our breed, the number of World Champions she has bred and the elegant broodmares now in other programs producing even more champions, our wish is that Ranger continues that legacy. I would love to see a field of foals with his curves, his charisma and his kindness!”